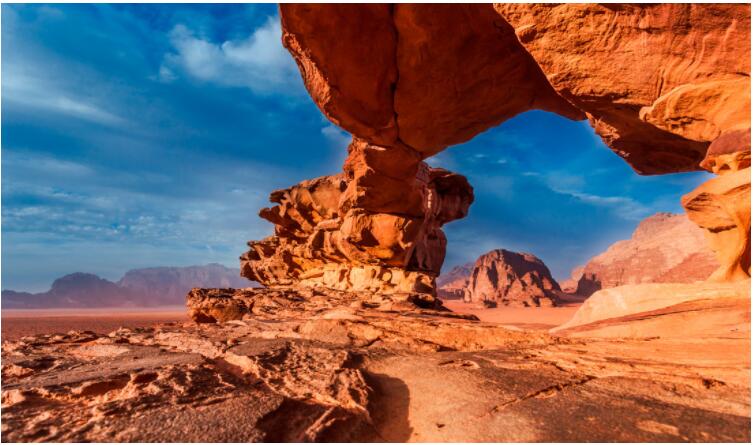 Join a tour of the history and nature to two of perhaps the Middle East’s perhaps most interesting and tourist-friendly countries – Israel and Jordan. You get the opportunity to easily and comfortably experience the countries’ main sights such as the Old City of Jerusalem, the beautiful rock city of Petra, the barren but improbably beautiful desert area Wadi rum and the sunny beaches of the Dead Sea – and of course much more!

Day 1: Travel to Israel (Tel Aviv)
Meals are included on board the long-haul flight. After arrival transfer to the hotel. Overnight in Jerusalem

Day 2: Jerusalem
After breakfast we travel north to visit the Mount of Olives (or the Mount of Olives as it is also called) from where you get a fantastic view of the Old City of Jerusalem. We see famous landmarks such as the Rock Dome on the Temple Mount and pass the Gethsemane herb garden that Jesus is said to have visited before the crucifixion. We arrive at the Armenian Quarter inside the walls and continue walking along the winding alleys to the Western Wall (Wailing Wall) where thousands of Jewish pilgrims gather to pray. We continue into the Christian quarter along Via Dolorosa , which is said to be the road that Jesus walked with the cross to Calvary. We continue in Jesus’ footsteps to the Church of the Resurrection (Church of the Holy Sepulcher) and the supposed site of the crucifixion. We leave the Old City and head to Mount Zion just outside the city walls to visit the Dormition Monastery (Hagia Maria Zion Church) which stands on the site where the Virgin Mary is said to have died according to local tradition. We also visit King David’s tomb and the place where Jesus’ last meal is said to have taken place. Overnight in Jerusalem. (Breakfast and lunch.)

Day 3: Jerusalem – Bethlehem – Jerusalem
After breakfast we go to Bethlehem and Mangertorget (Krubbtorget) where we visit the Church of the Nativity, which according to many believers is located on the site of Christ’s birth. After admiring the church interior, we visit the cave over which the church was built in the 4th century to see the alleged site of Jesus’ birth. Just outside the city we also visit Beit Sahour (Shepherds’ Meadow) where angels are said to have announced the birth of Christ to some shepherds. Back in Jerusalem in the afternoon we visit Yad Vashem , a government institution tasked with protecting the memory of the Holocaust and honoring its victims and heroes. Before returning to our hotel, we go on a discovery trip at the Machne Yehuda market where you have the opportunity to buy locally produced delicacies and much more. There are also many pubs and restaurants in the area. Overnight in Jerusalem. (Breakfast and lunch.)

Day 4: Jerusalem – Amman (Jordan)
During the day we travel by bus to the Jordanian capital Amman , where we on arrival go on a city tour that begins with a visit to the King Abdullah Mosque which was completed in 1989 and holds at the top 7000 visitors. The mosque with its characteristic turquoise dome was built by the former King King Hussein in memory of his grandfather Abdullah I. We then head to the so-called “Citadel Located on the highest peak in the city with a nice view of the neighborhoods. Here you will find the ruins of the ancient Temple of Hercules and what remains of the Umayyad Palace, which was built in the 8th century. We then continue to the well-preserved Roman amphitheater and end the day with a walk through Amman’s older city district with its exotic market areas . (Breakfast, lunch and dinner.)

Day 5: Amman – Ajlun – Jerash – Amman
We head to visit the city of Ajlun and its fortress, one of the best preserved examples of medieval Arab military architecture throughout the Middle East, once controlled by Saladin. We continue to the Greco-Roman city of Jerash, also known as the City of a Thousand Columns. Jerash demonstrates the grandeur of the Roman Empire and the city is also known as the Pompeii of the Middle East. Jerash has perhaps the most and best-preserved Roman architecture outside the borders of Italy, and therefore lots of tourists come to Jerash. Overnight in Amman. (breakfast, lunch and dinner)

Day 6: Amman – Petra
After breakfast we leave Amman and travel south towards Petra . During the journey we visit the city of Madaba to visit the Greek Orthodox Basilica, where in the late 19th century the mosaic map from the 5th century that originally covered the floor of the basilica was discovered. The Byzantine mosaic map consists of two million stones in different shades of color and depicts the distribution of what was then Palestine, from Alexandria in Egypt to what is today southern Lebanon. Then we continue to Mount Nebo, which is mentioned in the book of Deuteronomy as the peak from which Moses, according to tradition, must have seen the promised land of Canaan. After getting a beautiful view of the countryside, we move on to the next stop, the Crusader castle in Al-Karak, which is the largest castle in Jordan and is located at an altitude of 1000 meters. Overnight in Petra. (Breakfast, lunch and dinner.)

Day 7: Petra – Wadi Rum
After breakfast, we explore the rock city of Petra , a completely unique world heritage site that has been named one of the World’s Seven New Wonders. The today abandoned city experienced its heyday just before our era when the city was an important trading hub along the caravan roads. The beautiful buildings carved out of the pink sandstone cliffs are an amazing sight! When the city was rediscovered in the early 19th century, it became a world sensation – you will understand why! In the afternoon we go to Wadi Rum with one of the most spectacular desert landscapes in the world. We get to experience the pink and orange-changing landscape with its incredible rock formations from our desert jeeps- it’s no wonder that many Hollywood movies were shot here! During the evening we see how the sun goes down over the dunes before we spend the night in a Bedouin tent camp. (Breakfast, lunch and dinner)

Day 8: Wadi rum – Dead sea
After breakfast we travel to the salt lake Dead Sea with a salinity of close to 34 percent. The water surface is more than 400 meters below sea level, which is why the beach at the Dead Sea is the lowest point on earth. During the journey, we stop at the Jordan River to visit the place where Jesus was traditionally baptized by John the Baptist . Arriving at the Dead Sea, anyone who wants to take the opportunity can take a dip. The high salinity makes you float like a cork! Overnight at hotel by the Dead Sea. (Breakfast, lunch and dinner)

Day 9: Dead Sea
Spend the day on the salty shores of the Dead Sea! We have access to the room until departure late in the evening. (Breakfast, lunch and dinner)

Day 10: Arrival in Sweden
We are expected to be back in Sweden at lunchtime. Meals are included on board the long-haul flight.